The Erythema migrans (EM) of Lyme disease can take many forms. The best known is a roughly circular red rash, without itching or pain, that slowly spreads outwards. It may clear in the middle and is often called a bull’s eye rash. 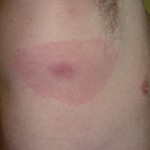 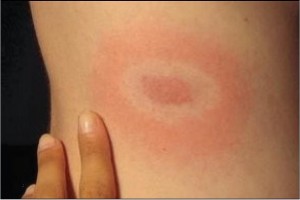 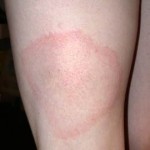 Immediately after an attached tick has been removed from the skin, the site of the bite will continue to be a little red, perhaps for a few days – this is not in itself an indication of Lyme disease. The EM usually develops about 14 days after the bite, but it can be sooner or later.

This is an uncommon, bluish-red discolouration and swelling, on the surfaces of legs and arms, that develops several years after infection. It takes a chronically progressive course and finally leads to a widespread atrophy of the skin in the area which has been described as “cigarette paper- like wrinkling of the skin”.

There is often associated peripheral neuropathy.

This is uncommon in Europe, and extremely rare in the US. It is a bluish-red, solitary swelling, with a diameter of up to a few centimetres, most often seen on ear lobes or nipples.