Lyme disease is caused by the bacterium Borrelia burgdorferi. The genus Borrelia is a member of the larger family of bacteria called Spirochaetes which were originally thought to be spiral shaped. The bacterium that causes syphilis (Treponema pallidum) is also a member of this family. 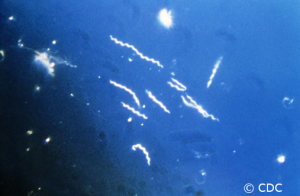 In the genus Borrelia, approximately 20 species are associated with relapsing fevers and transmitted by soft ticks (Ornithodoros or Argas) or by lice in the case of Borrelia recurrentis. However, since the 1980s there has been much interest in Borrelia burgdorferi, the agent of Lyme borreliosis (LB), which is transmitted by hard ticks of the genus Ixodes.

When B. burgdorferi was originally described it was believed to be the only species responsible for Lyme disease. However, over the following decades improved scientific techniques have made clear that the genetic diversity of this species was greater than expected and it is now usually referred to as B. burgdorferi sensu lato (s.l.) (ie B. burgdorferi in the broad sense) and consists of several different genospecies.

B. burgdorferi can be divided into about 20 genospecies of which only some are pathogenic – known to cause disease[1]. These are:

Although B. bavariensis [7] (formerly the B. garinii OspA serotype 4) and B. spielmanii are known to cause disease, B. bissettii and B. valaisiana have only been shown to be involved in individual cases of Lyme disease [6].  Discovering the specific cause of an illness requires PCR analysis which is rarely performed.

Recently a new genospecies B. mayonii has been found in the North Central region of the United States[2]. This seems to cause disease similar to Lyme disease.

In addition, B. miyamotoi, one of the relapsing fever Borrelia species has been identified in Europe [3] and is known to be present in UK ticks [4]. See our news item Borrelia miyamotoi new or old?

There is considerable evidence resulting from PCR and serological data and from isolation from patients, that the division of B. burgdorferi sensu lato (s.l.) into genospecies on genetic grounds also has clinical relevance – ie that they may each cause a slightly different disease.

Thus, B. burgdorferi s.s. is most often associated with arthritis, particularly in North America where it is the only known cause of Lyme disease, B. garinii is associated with neurological symptoms and B. afzelii with the chronic skin condition, acrodermatitis chronica atrophicans (ACA). Overlap between species in relation to clinical manifestations occurs and all may cause the early skin rash erythema migrans (EM). In Europe there is evidence that the EM caused by B. afzelii infections is more often ring-like, with clearing in the centre, whereas the rash caused by B. garinii and B. burgdorferi s.s. was found to be often smaller and without the central clearing.[5] The same study found that sex of the patient appeared to make a difference, in that the rash caused by B. afzelii was more likely to be ring-like in men than in women.