Ataxia
Abnormal, uncoordinated movements. This may affect the ability to walk, speak clearly, swallow or control hand/arm movements. It can be caused by a range of diseases that affect the brain and spinal cord. When it affects a part of the brain called the cerebellum it usually leads to an unsteady ‘staggering’ gait and problems coordinating the hands and arms.

Bell’s palsy
A type of facial paralysis caused by dysfunction of the facial nerve (VII cranial nerve) leading to an inability to control facial muscles usually on one but occasionally both sides of the face. The facial nerve may be affected by a number of diseases, including Lyme disease. When the cause is unknown it is referred to as Bell’s palsy, named after the Scottish anatomist Charles Bell, who first described it.

Biofilms
A biofilm is a complex aggregation of microorganisms, sometimes bound by a matrix or film. In the case of pathogenic bacteria, this protects the bacteria from antibiotics and from the immune system.

C6 EIA
An EIA using a synthetic version of the C6 peptide – part of the Borrelia membrane protein VlsE. See the manufacturer’s website.

Care pathway
A map of the care journey an individual with a given condition can expect. It details what to do, when to do it, by whom the action should be taken and where the task should be performed. It is a distillation of the best available, multi disciplinary, expert opinion and should be evidence based. Developing a care pathway is a way to improve the quality of evidence-based care, but must allow for flexibility in non-standard situations.

Cerebellum
A part of the brain which is involved in coordinating movement. When it is affected by disease, this can lead to cerebellar ataxia.

Cranial nerve
These are nerves which emerge directly from the brain, as opposed to spinal nerves which emerge from segments of the spinal cord. Some of these nerves are involved in the special senses of smell, sight, taste and sound. There are twelve pairs usually represented by Roman numerals: I Olfactory (smell); II Optic (sight) ;III Oculomotor; IV Trochlear; V Trigeminal; VI Abducens; VII Facial; VIII Vestibulocochlear; IX Glossopharygeal; X Vagus; XI Spinal Accessory; XII Hypoglassal.

Other forms including cell wall deficient intracellular forms have also been documented, with a hypothesised impact on treatment. The significance of these forms in human disease is not known.

Direct microbiological tests
The following are known as direct tests because they detect the organism itself, rather than detecting compounds generated by the disease, such as antibodies, inflammatory cytokines and other compounds which form part of the immune response.

Culture: the multiplication of bacteria, taken from infected tissue or body fluids, on artificial media in a laboratory. Multiplication aids identification. Borrelia are extremely small and cannot readily be distinguished from some other spirochaetes (spiral shaped bacteria of the same family) without the additional use of PCR (see below).

Microscopy: the use of a microscope to identify bacteria. The same comment on identification of Borrelia applies.

PCR: Polymerase Chain Reaction. A method of amplifying a targeted region of DNA. This can be used to identify the presence of specific gene sequences of a target such as Borrelia burgdorferi. This can be down to genospecies level.

ELISA
Enzyme-linked immunosorbent assay. Commonly used as a first stage serology test. A form of EIA (Enzyme Immunoassay). It detects low levels of Lyme disease antibodies but occasionally produces false positive results in samples from some patients with other conditions.

Encephalitis
Inflammation of the brain.

Functional
This is a term used to describe disorders, particularly neurological disorders for which there is no clearly demonstrable physical/organic cause.

Genospecies
See Borrelia burgdorferi. In biology a genus may include several related species and a species is generally defined as a distinct group that cannot, or does not, interbreed with another species. Because bacteria do not undergo sexual reproduction in the same way as animals and plants, the related but distinct groups within a genus are referred to as genospecies.

Heavy metal chelation
The removal of heavy metals such as mercury from a body.

Idiopathic
Of unknown cause. 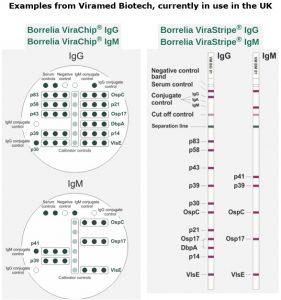 A test used to detect antibodies to specific proteins (antigens) in blood or spinal fluid of (in this case) the bacteria causing Lyme disease.

Increasingly immunoblots are produced by placing specific antigens on a strip, or in small wells on a microtiter plate as these are easier to analyse by machine.

Lymphocytic meningitis
This may be seen in Lyme neuroborreliosis and is sometimes referred to as Lymphocytic pleocytosis. This means that a high number of white cells (lymphocytes) are observed within the spinal fluid at lumbar puncture in a case of meningitis. Other infections may cause this e.g.viral infections.

Marshall Protocol
The Marshall Protocol was developed by Trevor Marshall, PhD, in 2002 to treat certain diseases that involve autoimmune system dysfunction. The principle elements appear to be avoidance of vitamin D, the blockade of the hormone Angiotensin II with an Angiotensin II Receptor Blocker, Benicar (olmesartan medoxomil), and selected low dose antibiotics. It is claimed to be useful in a wide range of chronic inflammatory and autoimmune diseases, but there is no published scientific evidence.

Meningism
This is the triad of neck stiffness (nuchal rigidity), sensitivity to bright light(photophobia) and headache, which is the hall-mark of meningitis.

Meningismus means that signs of meningism are present but there is no evidence of active infection or inflammation.

Meningitis
Inflammation of the membranes (linings) of the brain and spinal cord. Typical features are headache, neck stiffness and photophobia (intolerance of bright light). Nausea and vomiting may also occur. In Lyme disease the headache may be severe but neck stiffness minimal or absent.

Meningoencephalitis
Inflammation of the linings of the brain and also the adjoining brain tissue.

Neuritis
Inflammation of one or more nerves which may cause pain, tenderness, impaired sensation, weakness and reduced reflexes. When a single nerve is affected it is called ‘Mononeuritis’ and when single nerves are affected simultaneously, ‘Mononeuritis multiplex’.

Neuropathy
Damage to nerves. Usually refers to ‘peripheral neuropathy’, which means damage to the nerves of the peripheral nervous system (see below).

Paraesthesia
Plural: parasthesiae. This refers to abnormal sensations such as pricking, tingling, burning and numbness, ‘pins and needles’ or ‘limb falling asleep’.

PCR
Polymerase Chain Reaction. A method of amplifying a targeted region of DNA. This can be used to identify the presence of specific gene sequences of a target such as Borrelia burgdorferi. This can be down to genospecies level.

Peripheral neuropathy
Damage to nerves of the peripheral nervous system (PNS) – those nerves outside the brain and spinal cord. PNS symptoms involve the motor and sensory nerves, including the facial nerve. Motor symptoms may cause weakness, eg foot-drop of paralysis. Common sensory symptoms include tingling, itching, numbness and sometimes severe shooting pain.

Persister cells
These are bacterial cells that have become dormant and stopped dividing. This is a bacterial response to stress, usually as a result of antibiotic treatment but may occur with immune attack or starvation. Persister cells are described as having “tolerance” to antibiotics rather than “resistance”, because if these bacteria resume their growth they remain susceptible to the same antibiotics that induced dormancy.

Prophylaxis
Preventative medicine. In this case, prescribing a course of antibiotics following a tick bite in case the patient has been infected.

QiGong
QiGong is a form of exercise and breathing based on traditional Chinese medicine and martial arts.

Serology
The detection of (in this case) antibodies to Borrelia burgdorferi. Serum is any body fluid with cells and clotting factors taken out. So Lyme serology can be performed on blood or cerebro-spinal fluid (CSF).

In the UK a 2 tier system is used for blood tests, encompassing an ELISA as a first stage serology test followed by an immunoblot to confirm antibodies to Borrelia burgdorferi. (See ELISA, C6 EIA, Immunoblot, Western Blot)

Viable but Non-Culturable bacteria (VBNCs)
This is another way of describing dormant bacterial cells that have survived threats eg antibiotic treatment. Since they are not actively dividing it is difficult to grow them in culture.

Western blot
A form of immunoblot.