On July 31st 2020 Public Health England (PHE) confirmed what they say is the “first case of a babesiosis in England”. Babesiosis is a well known, important animal disease, but this is the first officially reported case in England, though not the first in the UK.

Babesia is a protozoan parasite, like malaria, and it infects red blood cells. There are now known to be several forms of Babesia and the ones affecting cattle and dogs are the best studied(1). Babesiosis is well known to UK vets and causes “red water fever” in cattle – so called because the cattle urine is coloured by haemoglobin from the destroyed red blood cells.

Farmers often have fields called Red Water Field, but this seems not to affect a whole farm – babesiosis appears to be very local, and research indicates that this may also apply to human babesiosis. This might be changing though.

Over 100 Babesia species have now been recognised, the most important for human disease are

In Europe the parasite is hosted mainly in rodents, cattle, sheep and deer. From these hosts, it is picked up by ticks and transmitted to another animal. Ticks can also host B. divergens and B. venatorum by passing it transovarially (from adult to egg to larva tick). It can also be passed from human to human, by blood transfusion or rarely transplacentally from mother to child.

What are the symptoms?

Many people seem to recover after a very mild illness they may barely notice, but some feel quite ill. A few, especially those who have had their spleens removed or who are otherwise immunocompromised, have a more severe illness, and a few deaths have been reported.

How is it diagnosed?

A smear of blood can show particular characteristics under a microscope, but only in the early stages of disease. Blood tests for antibodies are now available but cannot identify the precise species: PCR is used for this. These tests all have difficulties:

Treatment is with specific antibiotics and quinine.

How long have we known about Human babesiosis?

Human disease was first confirmed in the 1950s, but there are now a few reported cases across Europe and antibodies to the disease have been found in 2-23% of people in several European countries (3), and this is higher among those who have had Lyme disease and so definite tick bites. The fact that reported (ie serious enough to be reportable) cases are few, yet seroprevalence is quite high, indicates that many people probably have mild, undiagnosed cases. 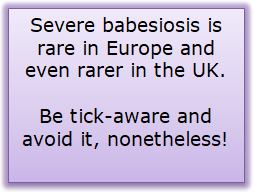 Work to understand the prevalence of this disease is really only recently underway, with increased medical awareness and better diagnostic techniques.

Babesiosis in the UK

In the UK, England had a suspected case in 1974 (4) and Scotland a confirmed case in 1979 (5). We now have this new confirmed 2020 case in Devon, though we know there have been other positive NHS blood tests.

An analysis of ticks collected from dogs showed Babesia present in ticks from across the UK (6) and a more recent paper (7) documented B. venatorum in Scottish sheep.