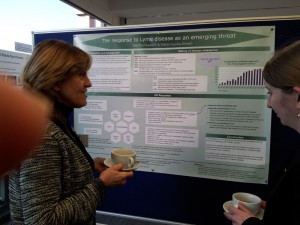 Who has responded, and what is being done?

There is not much room on a poster and it has to be succinct enough for people to read it and take it in while they are standing in front of it during a coffee break in the conference.

So we, briefly, argued the case that Lyme disease is an emerging threat and, briefly, highlighted the main responses of various groups in the UK: the NHS, researchers, Public Health England, the media etc.

Lyme disease is an emerging tick-borne zoonotic disease in the UK and is of increasing public health concern.

The lack of a reliable diagnostic test and limited knowledge of the disease amongst professionals has contributed to understandable public concern and frustration.

An effective public health response to raise awareness, acknowledge core uncertainties and assess the full impact of Lyme disease on the health of the UK population is urgently needed.

The conference itself had several talks on Ebola but also some general ones on risk assessment, host pathogen relationships and the European response to emerging diseases. There were two short talks directly connected with Lyme disease. One was on the Tick Activity Project with which several volunteers are involved, helping to collect ticks across the country. The other described a project using publicly available data on internet searches to examine the level of public interest and awareness around Lyme disease. The aim of this is to see where and how to target awareness messages on ticks and Lyme disease.

The Lyme disease project will be trying to identify new biomarkers which could form the basis of better tests – ie identifying what might be in the blood of early Lyme disease patients that is not present in healthy individuals nor in the blood of those with other conditions. It will also look to see if there is anything that differentiates those who make a full recovery from those who don’t. Nobody seems to have asked patients or doctors whether it is more important to find a test for early disease than for late disease, though this may well be because the HPRU believes that late LB patients are almost always sero positive.

LDA challenged Professor Solomon on his statement that the public was involved at all stages of the projects as no contact had been made with LDA until we were asked if we would be interested in helping to find volunteers to collect ticks for the already defined Tick Activity Project. We emphasised then that it was more important to the public to know what diseases ticks carry in the UK than to have confirmation that they are less active in certain weather conditions. But by this time the project had already been defined and was underway.

You will note that the LDA poster has a second page – we included this as a handout at the conference as some people would have wanted to know where we obtained the HPRU statement on Hantavirus. We also thought it important to point out that the James Lind Alliance project had defined what patients and doctors think are the top 10 uncertainties requiring research. We felt this needed to be drawn to the attention of researchers.

It is vital that patients are involved at the concept stage of research otherwise researchers are likely to simply address a question that interests them and perhaps neglect what is important to doctors and what is important to patients. Who is medical research supposed to benefit? We are following this up with the HPRU project leaders in person over the next few weeks.

LDA’s attendance at conferences like this is important in emphasising the legitimate place of the public in research discussions. We were welcomed by some with whom we already have good contacts and we made several new contacts and had a lot of interesting discussions. We hope we have shown many a new way of looking at Lyme disease – it is not just “a subject of considerable over-diagnosis and public concern.” as some would maintain.