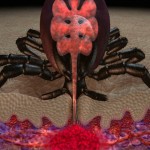 With most of the Christmas cooking and feasting under my belt, I was amused to read an article on the BBC web-site by the author Will Self, with the intriguing title, ‘The British Vomitorium’, exploring the our national obsession with food.

Half-way through, I was stopped in my tracks by the phrase ‘You are what you eat’ and whilst struggling to extricate my mind from images of Gillian McKeith dishing up quinoa and mung bean fricassee followed by the eager anticipation of examining the end product, ideas and questions began to bubble up and burst like grains of wild rice in my head.

Firstly, where did this phrase originate from? A quick search via Google yielded some answers: The French gastronome Brillat-Savarin wrote in 1826 “Dis-moi ce que tu manges, je te dirai ce que tu es.” (Tell me what you eat and I will tell you what you are), and in 1863/4 Ludwig Andreas Feuerbach wrote “Der Mensch ist, was er ißt.” (Man is what he eats) Thank goodness for Google and Wikipedia.

Secondly, questions about Lyme disease are never far from my mind and I began to wonder about the blood meals of ticks, specifically whether the uptake of Borrelia bacteria might confer any survival value to that tick and whether there would be any published evidence related to this. Most papers examine the survival of Borrelia in various hosts during the enzootic life cycle, but a quick search of PubMed threw up this most intriguing paper from Switzerland:

An extract from the abstract states, ‘Survival rate of nymphal and adult I. ricinus was significantly enhanced by infection by B. burgdorferi s.l. (Chi(2): nymph, P = 0.008; adult, P = 0.021). In adults, a negative effect of infection on tick survival was observed when spirochete load overcame a threshold estimated at 160,000 spirochetes per tick but not in nymphs. Moreover, ticks infected by B. afzelii survived better than other ticks (infected by other genospecies or not). The results here indicate that infection by B. burgdorferi s.l., and more specifically infection by B. afzelii, confers survival advantages to I. ricinus under challenging thermohygrometric conditions.’

I couldn’t see that this observation had been replicated, but if true would imply a win-win scenario for both tick and Borrelia, providing the bacterial population growth remained within certain limits. In a further act of reciprocity, infected ticks deposit a range of immunosuppressive salivary proteins into a bite site during feeding, facilitating bacterial survival in the early stages of infection.

I suppose other organisms including humans live in harmony with ‘friendly bacteria’. Odd to think a tick blood meal could be their equivalent of Yakult!