A recently published paper in the scientific journal ‘Cell’ has revealed that a naturally occurring antibiotic called Hygromycin A found in soil is highly effective against Borrelia, the bacterial cause of Lyme disease. The research was carried out using cells in the laboratory and was also tested on mice using bait containing the antibiotic. This showed that it was effective and had the added benefit of not disturbing the mouse microbiome

due to its narrow spectrum of activity. This is in contrast to broad spectrum antibiotics such as doxycycline and amoxicillin commonly used for treatment of Lyme disease, which may cause widespread disruption to gut flora causing diarrhoea, which can be severe.

There is also newly emerging evidence that such broad spectrum antibiotics, may lead to an unhealthy imbalance of gut bacteria, which has been linked to the development of Post Treatment Lyme Disease in some patients. 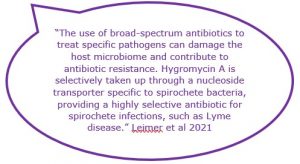 The antibiotic resembles essential nutrients called nucleosides and is taken into the bacterial cell by a specific transport system in the outer membrane of Borrelia. This transporter appears to be the only one involved in uptake of vital nutrients, and as such is essential for the survival of Borrelia, a kind of “Achilles’ heel.”

This key role means there is less chance of antibiotic resistance developing, since Borrelia cannot afford to lose it or shut it down. Once inside the bacterial cell, Hygromycin A blocks protein synthesis by targeting ribosomes. This mode of attack kills Borrelia by reducing its capacity for bacterial growth, repair, and reproduction. Importantly, there was no sign of toxicity against human cells, or in the mice when high doses were given orally.

The current research is pre-clinical, which means that further work is necessary before Hygromycin A can be trialled as a treatment in humans. This may pave the way for more targeted treatment of acute and late Lyme disease and preventive treatment after a tick bite (prophylactic treatment). The additional hope is of reducing the risk of Post Treatment Lyme Disease by sparing the microbiome.

The authors raise the intriguing possibility of treating reservoir hosts such as mice with bait containing the antibiotic as an environmental measure aimed at Lyme disease prevention. 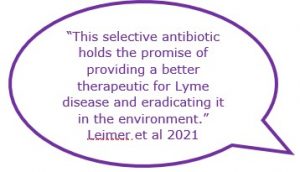 Hygromycin A was actually discovered in the 1950’s but discarded since it was thought to be of limited use due to its narrow range as an antibiotic. It was recently re-discovered by Professor Kim Lewis and his research team who screened soil samples looking for compounds specifically targeting Borrelia. Hygromycin A is also highly effective against other spirochaetes such as those causing syphilis and yaws.

A company called FlightPath is now filing in the US for the initial go-ahead required before Hygromycin A can be tested in people.