Lyme disease sufferer Denise Longman launched a petition in April 2010. This is still open and collecting signatures . You can read the detail of the petition and browse other people’s comments.

In addition to the on-line signatures nearly 1,000 names have been collected on paper forms by people canvassing friends and relatives. A downloadable form is available for anyone who wishes to do this in their local area. Scroll to the bottom of this message and download the form to use.

The first 2,164 signatures were handed in to Downing Street on 9th May following a rally that had been held that day opposite the Department of Health. Despite wet weather, 50 people attended, having travelled from across the UK and Ireland to get there. 4 were in wheelchairs. One patient who couldn’t get there had spent months making small green flags with the names of others who were also too ill to be there, plus one person who had died earlier this year from Lyme disease. Lady Mar supported the demonstration in the monring.

Late in the afternoon six of the demonstrators crossed to Downing Street and the photograph shows them shortly afterwards with two MPs, Mark Lancaster (Milton Keynes) and Stephen Brine (Winchester) who had supported the demonstration. 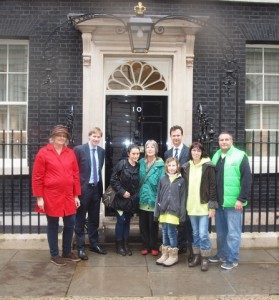