Where do we find ourselves at the start of 2014?

On December 16th LDA had a meeting at the Department of Health. The purpose was to use cases documented through LDA’s help desk to highlight to the Department the  shortcomings in the current provision of care for Lyme disease patients. We have made them aware of the following:

The clinic is under-resourced and has a long waiting list.

The one light in an otherwise depressing scenario, this laboratory has been engaging with LDA and is steadily widening its knowledge and experience. There is still some way to go, in particular:

There is an agreed action plan to move these and other points forward, however, so optimism reigns at least in this quarter.

That we had a meeting with the Department of Health at all is Good News; that our presentation of this evidence above (which did not mince words) was received so well is very encouraging. We received a very sympathetic hearing and no argument was raised about the issues and the evidence presented. Ways of improving the situation were discussed and this conversation will be continued in the New Year. More cause for optimism.

However – the past still casts a shadow

The UK member of the Ad Hoc International Lyme Group engaged in behind the scenes activism which has resulted in at least 10 years of mis-information being supplied to UK clinicians. Full test results were not reported by the previous Lyme specialist laboratory, so clinicians have no experience of test interpretation. The view that relapses are virtually non-existent and that chronic Lyme does not exist was repeatedly stated; often in peer reviewed journals. Patients and patient groups have been portrayed as seriously misguided.

This legacy explains a lot of the attitude amongst doctors in the NHS and will take some time to balance out. It is notable that those with the main responsibility for taking decisions about diagnosing and treating Lyme disease – infectious disease consultants and neurologists – have been much more influenced than those on the receiving end of those decisions (GPs), or those consultants peripherally involved and out of range of the Ad Hoc Group.

And then there is all of us, The Public

To be balanced in this state-of-play summary, we need to mention the other side of the equation.

Public awareness of Lyme disease has increased through 2013. This can only be a good thing, but it does bring with it a difficulty: Lyme disease has received more publicity than other diseases with overlapping symptoms. It is understandable that someone reading a newspaper of magazine article will often suddenly realise that “Wow! those symptoms are just like mine!” and will then focus on obtaining treatment for a disease that is treatable with cheap antibiotics.

That realisation often does bring a positive test result followed by treatment. Sometimes, however, a negative test result causes the person to search for public opinion on the validity of the test and to feed in their own, personal opinion that “the test is no good”. It is, in fact, the interpretation of the tests which is at fault, not the tests themselves.

Public Health England maintains (on that long outdated HPA web page) that “Patients with late-stage LB are very rarely seronegative; there is greater than 99% chance that they will have a positive antibody response”. Now anyone looking carefully at the peer reviewed literature can see that this is simply not true and at one stroke, confidence in the doctor who says “you have a negative test result; you cannot have Lyme disease” is lost.

That lost confidence is voiced through on-line forums and picked up by the next person who has a negative test result. People desperately want treatment for themselves or their loved ones to get them better – back to work, back to normal life. Where do they go for the diagnosis and treatment they are being denied? Private, often overseas, clinics.

The patient may or may not recover following treatment. But –

This is a simple feedback mechanism and all of it is fed by the legacy of the past. 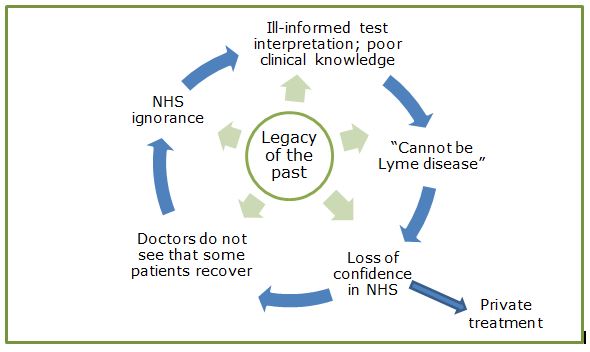