France has finally published its National Protocol “Lyme and tick-borne diseases: go beyond controversy and propose a solution to everyone”.

Why the marketing hype? What is their solution? The French treatment recommendations actually fall short of what NICE recommends: they give only 14 days treatment for EM, 28 days maximum treatment (for late Lyme neuroborreliosis or arthritis) and no repeat treatment unless under a specialised tick-borne diseases centre as part of a trial. One has to hope that their specialist centre is nearer being set up than ours! 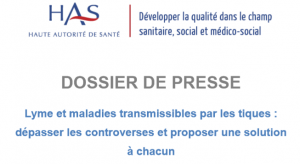 The French national Lyme Plan was launched in September 2016 and it had been widely assumed that France was going to “lead the world in treatment of Lyme disease”. The protocol for diagnosis and treatment was expected in July 2017 and then delayed “until the start of the school year”. Finally, a year after it was expected, it has emerged. Did they have some difficulties, perhaps, in deciding what to say and how to say it?

It should come as no surprise that their panel of experts and patients found research evidence lacking: we have been saying this for years. It is not much consolation that all these national bodies of experts are now agreeing with us.

We know that people with persisting symptoms might not have continuing disease, we don’t need to be told this again and again, we need a test that can distinguish between cured disease and still-active disease.

We know some people do not recover following 21 days treatment – most trials and studies report that “some patients were re-treated”.  Why are these “outliers” not followed up and documented to produce some quality data on which we, patients and doctors, can rely?

“Some people who have been potentially exposed to ticks show diverse, persistent, generally diffuse, unexplained clinical signs that can be disabling. In the current state of knowledge, we do not know if these signs are due to the existence of persistent Lyme borreliosis (after treatment or not) or other pathogens that would be transmitted by ticks. It can also be other diseases or syndromes.”

So they have proposed a term to cover for the fact that some people who may have been exposed to ticks may fall ill and we can’t tell what is wrong with them –  SPPT is “symptomatologie/syndrome persistant(e) polymorphe après une possible piqûre de tique”.   Now, also including those terms for people with a definite tick bite, definite Lyme disease and persistent symptoms following treatment, we have:

Medical science cannot yet explain everything, but people can always invent another acronym!

Some French patients have launched a petition as happened in the UK following the NICE guideline, but although one can understand the frustration, it may not be the answer.

Time after time, national guidelines are stating “not enough evidence”. How many more European expert committees do we have to have siting round a table looking at this inadequate evidence and saying “just treat how you’ve always treated because we don’t know any better”?

There is a possible way forward: any doctor, faced with a complex case, should be able to enrol patients who may need more treatment beyond the national guideline in a carefully considered international trial of further treatment, looking at what makes some infections and some people more difficult to cure.