We gathered at Exeter University on 8th July for a full day of presentations at the 2017 LDA Conference.

LDA’s Chair, Stella Huyshe-Shires, opened the proceedings with an overview of Lyme Disease in the UK, and its interactions and dependencies (both human and animal). Stella described the way ticks obtain and pass on infection to a range of hosts, including we humans. She ran through some of the complexities of Lyme disease – not just one type of tick, nor one host nor even one sort of Borrelia. The interactions between all these varying elements complicates the science, from diagnosis to treatment.

We then moved on to the research being carried out to try to solve some of the unanswered questions.

Dr Tim Brooks presented on behalf of The Health Protection Unit for Emerging Zoonoses and Infectious Diseases (HPRU EZI). Dr Brooks is one of the theme leaders for Clinical Surveillance Research under HPRU and he reported on a recent workshop at which a gathering of researchers across the country had discussed the present and future research activity relating to ticks and tick-borne disease.

At this workshop, held in Scotland at the beginning of June, each group (Tick ecology, disease epidemiology and diagnostics & immunology) presented their current projects and their key unanswered questions.

A number of significant challenges were perceived.

It was uplifting for LDA and delegates to see that the James Lind Alliance top 10 uncertainties, as agreed by patients and doctors, had been presented at this meeting. Late in the day, but at least being acknowledged!

Dr Anja Garritsen from the Netherlands was the main speaker after the break and she spoke about different concepts in diagnosis of Lyme Disease. Dr Garritsen comes from a pharmacology background but runs a laboratory, Innatoss, in The Netherlands looking at novel ways of applying existing technologies to more specifically and accurately diagnose disease – especially Lyme and Q fever, both of which are much more in evidence there. Dr Garritsen pointed out that the existing ‘Blot’ tests need to be interpreted by someone who knows what the results might mean, especially when the test values are just above, or just below, the threshold for a ‘Positive’ or ‘Negative’ result. 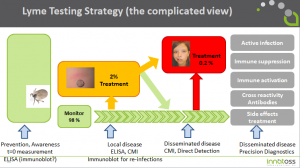 She also said that it was critically important to know where, and preferably when, the person was infected: it’s no use testing in Europe for antibodies to an American form of Borrelia unless the blot test has been set up to detect them.

Of course, if you as an individual, haven’t made antibodies for some reason then there is no point in pursuing serology. Another point Dr Garritsen made was to question whether there was any benefit to testing when there is no treatment option to follow a positive result.

Dr Sandra Pearson, LDA’s medical director, is a consultant psychiatrist working in the NHS. Sandra gave an update on the worldwide efforts to fight Lyme Disease. 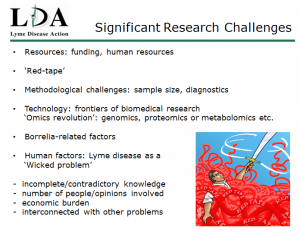 LDA sends Sandra to international conferences so she has an opportunity to directly engage with researchers and hear what is going on, who has got funding and what groups are aiming to do.

She took us through current plans across the world. So if you want an up to date view of what is taking place in Europe and America, have a look at her presentation. It will be interesting to see what progress we can report on worldwide, and UK, research at our 2018 conference!

Ian Wright is a practising vet, with a Masters Degree in Animal Parasitology, and Head of the European Scientific Council of Companion Animal Parasites (ESCAAP) UK and Ireland. Despite most people (on a show of hands) not having pets this was one of the most highly rated talks of the day!

The focus on pets, rather than humans, was refreshing. Ian filled us in on the outbreak of Babesia canis in dogs in Essex as well as going through Lyme disease in dogs and cats. We were able to have a discussion of exotic zoonoses and imported vectors (other ticks) which pet owners can unwittingly introduce into the UK.

Dr Jinyu Shan is a microbiologist, and currently working at Leicester University amongst other things, on the development of bacteriophage-based diagnostics for Lyme Disease.

In a nutshell, bacteriophages (phages for short) are viruses which can be synthesised, and ‘trained’ to infect specific bacteria. In the process of infection by the phage, the bacteria ‘shed’ markers which can themselves be detected to indicate the presence of whatever bacteria is being sought.

Jinyu gave us an update on their work evaluating their new test against a cohort of Lyme disease patients. Their next move is to try it with “controls” of healthy people and some with other conditions to check on specificity. Dr Garritsen offered some samples that Innatoss have collected and documented. A really good example of the sort of collaboration that can happen at the conference!

During the breaks and in the evenings, there was a lot of renewing of friendships and forging of new ones. Exchanging views and experiences is always one of the major benefits of the LDA conference. The researchers who came had the opportunity of talking to patients and also making contacts with each other. Exeter researchers working on Q fever met Anja Garritsen whose company also works on Q Fever. These all had the opportunity of discussing technicalities of diagnosis with Tim Brooks and Jinyu Shan. Very productive all round!

For those of us who are suffering, or have suffered, from the effects of this disease it may often seem we are alone and ignored. However, the scope of all of these presentations showed the extent to which Lyme Disease is being taken seriously and how much progress is being made in the UK and around the world. The determined and persistent pressure from patients is slowly, slowly moving things forward.

The presentation slides are on the website, so have a look through. We are planning for the 2018 conference already, so put 1st September 2018 in next year’s diary – we look forward to seeing you in Exeter.