Public Health England has now published provisional figures for Lyme disease for the third quarter of 2017 in the Health Protection Report , covering the period from January to September (weeks 0-39). 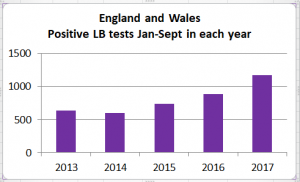 The report links this increase to “weather patterns affecting tick numbers, increased awareness in healthcare professionals and the public, and increased demand for Lyme disease testing.” It is likely that all the effort and hard work involved in raising awareness, including via the media, and online social media is now producing a positive result.

The need for further research into the scale of the problem in the UK is finally being recognised publicly: “PHE is keen to better understand this increase in cases and is currently investigating options to improve our knowledge of the epidemiology of Lyme disease in the UK.”

In 2016 the total for all four quarters was 1156, and this has already been exceeded in the first 9 months of 2017. It will be interesting to see what the final total for the 2017 will be once figures for the final quarter (weeks 40-52) are included and provisional figures confirmed.

Lyme Disease Action’s Medical Director says “The scale of this increase is significant. Despite recent increased awareness, cases will still be being misdiagnosed or undiagnosed.  There is no record of numbers of cases clinically diagnosed and treated without serology, so we have no way of knowing whether the total number of these cases is also increasing by a similar amount.

So once again we ask “Where are the specialist clinics?”.