Willy Burgdofer died on 17th November at the age of 89. His name lives on in the bacterium he discovered – Borrelia burgdorferi. 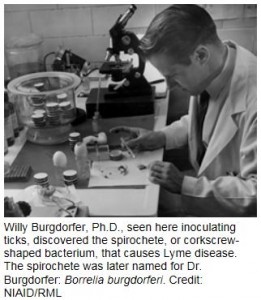 It was serendipity that led the young Swiss researcher from his study of the relapsing fever spirochaete and research in disease outbreaks in Switzerland to the outbreak of another disease in the USA.

His early studies in Switzerland in the 1940s kindled his interest in the role of arthropod vectors of human pathogens. He told his professor he would like to work in this area and was given a dish of soil and told it contained soft bodied, fast feeding ticks from the Belgian Congo which transmit the relapsing fever spirochaete Borrelia duttonii. The next 3 years were spent on this work and he got to know ticks and spirochaetes very well. Lucky strike number one.

Quite by chance he became aware of the view of European dermatologists that the skin rash erythema chronicum migrans (ECM), sometimes associated with meningitis and neurological symptoms, might be caused by a spirochaete transmitted by ticks. Spirochaetes had not been found in the slow feeding, hard ticks of Europe but Sven Hellerstrom postulated this at an obscure conference in Ohio in 1949. With no internet in those days, you had to be present at a conference, or pick up published conference proceedings to hear news like this. Lucky strike number 2.

In 1951 Willy gained a research grant from Switzerland and under a US Fellowship moved to the NIAID* Rocky Mountain Laboratories in Montana, USA to work with ticks and species of Borrelia causing relapsing fever. Work was going well, but then relapsing fever became less important and research funds were withdrawn. He moved on to tick-borne viruses and in particular trying to find the cause of a Rocky Mountain spotted fever outbreak in New York in the early 1970s. The New York State Health Department had given him some American dog ticks to study. Over the next 2 decades he became known as an expert in the relationship between the ticks and the microrganisms they carried. Lucky strike number 3.

As a result of his reputation, in 1977 he received a phone call from Allen Steere, 2,000 miles away, asking how ticks could be evaluated for microorganisms, following the discovery of Lyme arthritis at Old Lyme, Connecticut. Willy provided technical information on dissection of ticks and preservation of tick tissues and Allen Steere happened to mention the deer tick as the likely vector of Lyme disease. Lucky strike number 4.

In 1978 he went back to Switzerland for a sabbatical to help in research to find Coxiella – the organism causing Q fever – in the European sheep tick. This failed, but they did discover a new spotted fever Rickettsia and Willy happened to notice in a few ticks, the larvae of a known deer parasite; filed away in his mind – ticks and deer. He kept his microscope slides with smears of tick tissues and took them back with him. Lucky strike for Europe.

He went back to his Rocky Mountain spotted fever research but they couldn’t find anything in the American dog tick so he suggested that the team switch to looking at the deer tick instead. Ticks, knowledge of different micro-organisms, deer, painstaking research, the ability to “happen to notice” all coming together. He didn’t just have luck, he cultured it.

In 1981 he was given some ticks from an area known for the occurrence of Rocky Mountain spotted fever and Lyme disease. Definitely the biggest lucky strike. He didn’t find what he was looking for but suddenly noticed what he says were “some faintly stained, rather long” organisms that looked like spirochaetes. As he looked through the microscope he remembered the presentation by Sven Hellestrom back in 1949. Over the next few hours he dissected 24 ticks and found spirochaetes in 60%. He and his 5 colleagues published their findings in 1982 (1) proposing this organism caused the American Lyme disease.

A few days later he was examining the saved slides from his 1978 Swiss sabbatical. On the trail and looking for something different now, he found similar spirochaetes in 17% of those European slides. Finally, in the spring of 1982 he received ticks from Switzerland and was able to confirm his findings: that the European ECM was caused by the same organism as the American Lyme disease. This paper “Erythema chronicum migrans – a tickborne spirochetosis” (2) was published in a Swiss journal in 1986.

Inspired and persevering research and a maintenance of links with colleagues on both continents enabled him to pull all this together. We will ever be thankful for his early discoveries and later work.

* NIAID – The USA National Institute of Allergy and Infectious Diseases